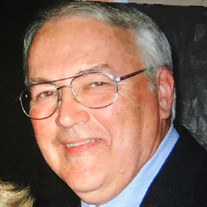 Dennis O. Gould, age 73 of Hobart, passed away September 27, 2020 at the VNA Hospice house in Valparaiso, IN. He was born in Gary, IN. to parents- Donald and Lillian Gould, on July 28, 1947. His parents preceded him in death. Dennis was a graduate of Emerson High School. Class of 1965. He enlisted in the U.S Army serving in Germany for 3 ½ years. When Dennis returned home, he attended the apprenticeship school at Local 697, which began his career as an electrician. He worked for several electrical contractors and retired in 2015. On August 9, 1975 he married Jennifer (Bleicher) Gould and resided in Hobart. They were blessed with the birth of twin boys - Casey Alan, and Cody Ryan in 1984. Dennis was a past member of the Hobart Jaycees, later in life he was Democratic Precinct Committeeman. He coached his sons baseball, basketball, and soccer teams as they grew up. He developed a love for soccer and attended the World Cup in Europe twice. Dennis was president of the Hobart soccer club. Later he became president of the Northwest Indiana Old Boys Football (Soccer) club. He also played and had a team in the league. Dennis was a soccer referee for many kids and high school games. He loved to travel the United States and Europe with his family and friends. Dennis is survived by his loving wife of 45 years- Jennifer; twin sons- Casey and Cody; pet dog Odin; siblings- Dwayne (Ronna) Gould from FL, Darryl (Kathi) Gould of IN, Diane (Fred) Boswinkle of IN, Daniel Gould from New Jersey, Donald Gould, and many loving nieces, nephews and friends. Due to Covid-19, a private service for the family will be held Saturday, October 3, 2020 at 9 a.m. at Burns Funeral Home, 10101 Broadway, Crown Point. Pastor Scott Mauch officiating. A visitation for the family will be held on Saturday from 9:30–11 a.m. at Burns. A memorial service will be held at a later date. In lieu of flowers, memorials may be made to VNA Hospice, 2404 Valparaiso St, Valparaiso, IN.; or the Hobart Humane Society, 2054 E. State Rd 130, Hobart, IN. www.burnsfuneral.com

Dennis O. Gould, age 73 of Hobart, passed away September 27, 2020 at the VNA Hospice house in Valparaiso, IN. He was born in Gary, IN. to parents- Donald and Lillian Gould, on July 28, 1947. His parents preceded him in death. Dennis was a graduate... View Obituary & Service Information

The family of Dennis O. Gould created this Life Tributes page to make it easy to share your memories.

Send flowers to the Gould family.