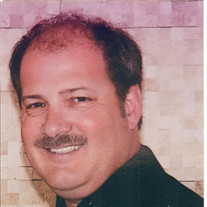 David Wayne Rager, age 58, of LaPorte, Indiana, left this earth and entered into heaven on December 26, 2021. He was born on April 16, 1963 to Gilbert and Marcia Rager of Chicago Ridge, Illinois, where he grew up with his ten siblings. David graduated from H.L. Richards High School. He attended Christian Hill Church in Orland Park, Illinois where he met and married the love of his life, Vonda Finney. Together they had nine children. David was an Army veteran having served from 1981 to 1986 and he was so proud to have served. He was an avid sports fan, especially loving his Chicago teams. He never missed an opportunity to talk sports, movies or music with anyone that he could. He loved music, live shows were his favorite. He hardly missed a chance to meet up with friends and family anywhere that a good cover band was playing. David was a hard worker, working as a truck driver for more than twenty-five years. He loved working festivals and fairs as a set-up foreman, using his take-charge attitude to make sure everything went off without a hitch. David loved his family more than anything. He was so incredibly proud of his children and grandchildren. He had nicknames for everyone. David was never one to turn down a drink with his sons and daughters, brothers and friends. David was a fierce and loyal friend to many. He leaves behind a big and loving family. David was met at the gates of heaven by his father, Gilbert, his sisters, Dawn and Denise and his grandparents Elmer and Ione, father-in-law, Frank, his sister-in-law, Debbie and his brother-in-law, Jim. He is survived by his wife of thirty-eight years, Vonda (Finney) Rager, his children, Erin Rager Queena (Robert), David W. Rager, Jr. (Kim), Nicholas Rager (Amie), Benjamin Rager (Erin), Alexis Rager (Zach), Dylan Rager, Rachel Rager, Lucas Rager and Samuel Rager; grandchildren; Kyleigh, Gavin, Ethan, Evelyn, Liam, Cobie, Sylar, Treva, Taggart, Eleni, Emilia, Eleanora, and Elias. David is also survived by his mother and stepfather, Marcia and Jim Przechera, mother-in-law, Barbara Finney and his siblings; Daniel Rager (Connie), Donald Rager, Daryl Rager (Claire), Dale Rager, Dennis Rager, Dina Rager, Darren Rager, Douglas Rager, Dustin Rager (Jessica), Michael Rager and Rhonda Rager-Robisheaux, and many nieces, nephews and extended family members. A visitation will be held on Saturday, January 8, 2022, from 11:00 a.m. until time of funeral at 3:00 p.m. at Burns Funeral Home, 10101 Broadway, Crown Point, Indiana. www.burnsfuneral.com.

David Wayne Rager, age 58, of LaPorte, Indiana, left this earth and entered into heaven on December 26, 2021. He was born on April 16, 1963 to Gilbert and Marcia Rager of Chicago Ridge, Illinois, where he grew up with his ten siblings. David... View Obituary & Service Information

The family of David Wayne Rager created this Life Tributes page to make it easy to share your memories.

Send flowers to the Rager family.