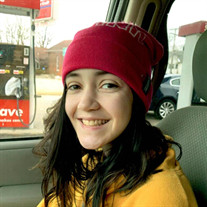 Chyeann Nichole Canter, age 20, was born in Bellville, Illinois and passed away peacefully in Hobart, IN April 6, 2021. Chyeann was an outgoing bubbly spirit. Chyeann battled diabetes for 10 years but still found a way to enjoy life. We will miss her smile, sassiness, and big heart. She is survived by her loving mother- Rochelle Canter; father- Carlos Canter; sister and brother-in-law-Isabel Gonzales and Zackery Compton; brother and sister-in-law-Ramon Gonzales and Etalia Moreno; brothers- Aden Canter, Samuel Anderson, and Carson Canter; grandparents- Richard and Diane Petrakovic; uncles and aunts-James and Gina Wallace; Christy Losaw and David Losaw; cousins-Leah Wallace, Nicholas Petrakovic, and Gage Aries; many great aunts, uncles, and cousins. Chyeann was preceded in death by her grandmother-Lonna Summers; uncle- Scott Petrakovic. Chyeann attended Hobart high school where she created long lasting friendships. Chyeann spent the last 10 years in and out of ICU battling diabetes and gastroparesis. Even after all she went through she still loved life and being a young adult with dreams and aspirations of being a teacher. Chyeann enjoyed music and taking 1000s of Snapchat pictures. As per Chyeann, she would tell you she was a “Professional White Castler”. She also fell in love with Santos Valles who was with her till the end and doted on her like a princess should be! Chyeann’s proudest title and part of life was becoming an aunt! In honor of Chyeann, Isabel’s upcoming baby girl will be named Alaya Chyeann, so that she will always have a guardian angel watching over her and accompany her on her life's journey. Friends may visit with Chyeann’s family on Tuesday, April 13, 2021, from 2 p.m. until time of sharing at 6p.m. at Burns Funeral Home, 701 E. 7th St., Hobart, In, 46342. www.burnsfuneral.com

Chyeann Nichole Canter, age 20, was born in Bellville, Illinois and passed away peacefully in Hobart, IN April 6, 2021. Chyeann was an outgoing bubbly spirit. Chyeann battled diabetes for 10 years but still found a way to enjoy life. We will... View Obituary & Service Information

The family of Chyeann Canter created this Life Tributes page to make it easy to share your memories.

Send flowers to the Canter family.