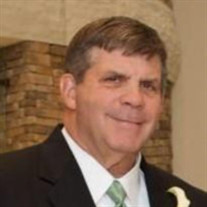 Christopher J. Nicolini, 75, passed away peacefully after a courageous battle with Alzheimer’s disease on Monday, September 27, 2021 in Merrillville. He was the first born to Thelma V. and Lewis F. Nicolini on July 14, 1946, in Mishawaka. He found an early love of athletics, particularly football. He was a loving husband to his wife Gail (Marich) for 45 years, marrying on June 17, 1977. He loved his children: Stephanie (Jason) Borem of Brownsburg, IN; Dominic (Kristin) of Lutherville, MD; and Gina (Nick Green) of Noblesville, IN. He was proud to be Papa to his six grandchildren, Simon and Jude (Brownsburg, IN); Sutton, Campbell, and Quinn (Lutherville, MD); and Ogden (Noblesville, IN). Christopher is also survived by two brothers, Timothy of Mishawaka, and Mark of Milwaukee, WI, and one sister, Mary (James Schmidt) of Mishawaka. He was a devoted son-in-law to Frances (Spiller) Marich, who died in December 2018.Christopher graduated from St. Joseph High School in South Bend in 1964. He held a bachelor’s degree in Political Science and a master’s degree in Educational Guidance both from Xavier University in Cincinnati. He played four years of football for the Musketeers. After collegiate ball, he played semi-pro football for the Chicagoland Bulls. He was a member of the Reserve Officer Training Corps (ROTC) at Xavier. He served 22 years in the Army Reserves, retiring with a rank of Major. He later served as an Admissions Representative for the United States Military Academy at West Point. He served the Catholic Diocese of Gary for 43 years, shaping the students of both Andrean High School and most recently Bishop Noll Institute. In addition, he taught at Lowell High School. He taught social studies and was athletic director at Andrean and was a guidance counselor / director of guidance at Bishop Noll. He coached hundreds of student athletes in football and track at both schools. He was a certified official for the Indiana High School Athletic Association. He loved being in education because he saw it as the chance to develop our number one resource- the human resource. Christopher was inducted into the Andrean Hall of Fame in February 2010 and was inducted into the Bishop Noll Institute Hall of Fame in April 2012. In February 2017, he was honored for his 43 years of service to the Diocese of Gary. He amassed countless coaching awards, particularly for producing strong track and field athletes. Christopher enjoyed attending Army-Navy games in all kinds of weather with his son and timing his daughters in track and swimming. He had a wry sense of humor, and always had an anecdote to share. He loved all things related to his Italian culture, from cannoli to his wife’s stuffed rigatoni. He was truly a servant of Christ. In lieu of flowers please make a donation to Andrean High School, 5959 Broadway, Merrillville, or Bishop Noll Institute, 1519 Hoffman St, Hammond, IN 46327, Merrillville Education Foundation, P.O. Box 14475, Merrillville, IN 46410. A prayer service will be held on Friday, October 1, 2021 at 5:00 p.m. Burns Funeral Home, 10101 Broadway, Crown Point, where a visitation will be held from 2:00 p.m. to 7:00 p.m. A funeral mass will be celebrated on Saturday, October 2,2021 at 10:00 a.m. at St. Joan of Arc, 200 East 78th Avenue, Merrillville, where Chris was a member. www.burnsfuneral.com

Christopher J. Nicolini, 75, passed away peacefully after a courageous battle with Alzheimer&#8217;s disease on Monday, September 27, 2021 in Merrillville. He was the first born to Thelma V. and Lewis F. Nicolini on July 14, 1946, in Mishawaka.... View Obituary & Service Information

The family of Christopher John Nicolini created this Life Tributes page to make it easy to share your memories.

Christopher J. Nicolini, 75, passed away peacefully after a courageous...

Send flowers to the Nicolini family.