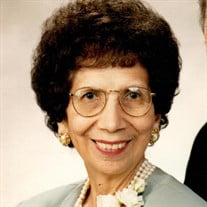 Catherine Hatch, age 90, passed away peacefully on Sept. 24, 2020. She was born to the late Leo and Pauline Procopio. Catherine resided in Merrillville for many years where she was a devout member of S.S. Peter & Paul Catholic Church. Catherine... View Obituary & Service Information

The family of Catherine F. Hatch created this Life Tributes page to make it easy to share your memories.

Send flowers to the Hatch family.