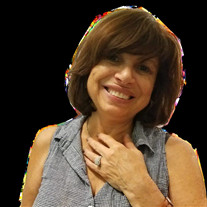 Bianca Lydia Wick (nee Lemus), age 61 years. Born to Eternal Life on May 26, 2021. Dear wife of Michael Sr., and loving mother to Michael Jr., Anthony, Andrea and Gianna. Beloved sister to Jismina Saavedra, Schirley Savers, Orlando Rodriguez, Federico Lemus and Nestor Lemus. Further survived by nieces, nephews and many other family members and friends. Preceded in death by her mother Renee Castillo and her father Federico Lemus, as well as her siblings Richard Lemus, Mercedes Castillo, Maritza Castillo, Saul Castillo and Ivan Castillo. Born in San Pedro Sula, Honduras, Bianca immigrated to the United States in 1986 from Guatemala City, Guatemala. She proudly became a U.S. citizen in 1998 after she and Michael were married in 1993. Bianca worked for many years in various salons in Central America and in the United States and was a licensed nail technician in Illinois and Indiana. She was deeply loved by her clientele and coworkers and gave all that she had to serve others. A Mass of Christian Burial will be held at St. Joan of Arc Catholic Church (200 East 78th Avenue, Merrillville, Indiana) on Tuesday, June 1, 2021 at 11:00 AM. Most Rev. Robert J. McClory will preside, and Most Rev. Donald Hying will give the homily. Visitation will be held at the parish church from 9:00 AM until the time of Mass. Interment will follow on a later date at Holy Cross Cemetery, Milwaukee, Wisconsin. Masks must be worn during Visitation and Mass. The family suggests memorial gifts be made to the Conventual Franciscan Friars of Marytown, 1600 W. Park Avenue, Libertyville, Illinois 60048 to go towards an outdoor statue of St. Maximilian Kolbe that will be erected in Bianca's memory. Special thanks to the staff of Franciscan Home Hospice Care, as well at Franciscan Health, Rush and Methodist Hospitals and Northwest Cancer Center.www.burnsfuneral.com

The family of Bianca Lydia Wick created this Life Tributes page to make it easy to share your memories.