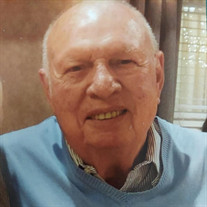 ​Arnold G. Gough (“Big Arn”) was born in Gary, Indiana in 1932 to Stella and Victor Gough, one of their eight children. Arnie attended Holy Angels Grade School in Gary where he made many lifelong friends. He received an athletic scholarship to Bishop Noll High School where he starred in football, basketball, and track. ​Following his service in the U.S. Army, he completed a bricklaying apprenticeship and shortly thereafter founded Gough Construction Company with his brother Neville. Arnie and Nev started Gough Construction with little more than a pickup truck and a wheelbarrow. Through hard work and great charisma, they built their company into one of the largest and most successful construction companies in the area. Among the hundreds of buildings, the company worked on over the years, one of the proudest achievements was the Southlake Mall, one of the largest and most complicated construction projects ever in Northwest Indiana. Gough Construction is still thriving under the leadership of Arnie’s son Raymond (Buzz). ​In addition to his extraordinarily successful business career, Arnie was active in many charitable endeavors. A few near and dear to his heart are the Crisis Center of Northwest Indiana, the Andrean High School Foundation, and the Tradewinds of Northwest Indiana which named him Man of the Year. He also relished in his Irish heritage and was active in the fraternal organization, The Friendly Sons of Erin, which also honored him as their Man of the Year in 2006. ​All those who know him describe him as larger than life. He was the life of every party, a jokester, a prankster, and interested in everyone he met. He loved golf, tennis, skiing, hunting, and fishing. The fishing trips he organized were legendary. He was often accompanied by his brother, his sons, his sons-in-law, his nephews, his neighbors, his lawyer, his accountant, his banker, his insurance agent, his financial advisor, various friends, and even his priest. He was a natural leader and people flocked to be with him. ​Arnie is survived by his wife Roberta (Boomie). They started dating their junior year in high school and have been married for 65 years. Arnie and Roberta have four adult children Arnie Jr. (wife Julie), Debra (Olin) (husband Jeff), Carol (Parks), and Raymond (Buzz) (wife Beth), 15 grandchildren and 11 great grandchildren (with 3 on the way). ​Private family services will be held at St. Paul in Valparaiso. In lieu of flowers the family has asked that donations be made to The Tradewinds of Northwest Indiana. Burns Funeral Home, Crown Point entrusted with arrangements. www.burnsfuneral.com

&#8203;Arnold G. Gough (&#8220;Big Arn&#8221;) was born in Gary, Indiana in 1932 to Stella and Victor Gough, one of their eight children. Arnie attended Holy Angels Grade School in Gary where he made many lifelong friends. He received an athletic... View Obituary & Service Information

The family of Arnold Gregory Gough created this Life Tributes page to make it easy to share your memories.

Send flowers to the Gough family.