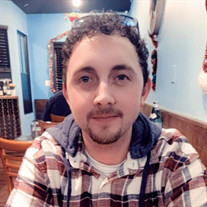 Adam Gerald Pritchard, age 30 of Valparaiso, passed away December 12, 2021. He was a graduate of Valparaiso High School and employed at Task Force Tips. Adam enjoyed fishing, disc golf and was an avid fan of the Indianapolis Colts. Adam was... View Obituary & Service Information

The family of Adam Gerald Pritchard created this Life Tributes page to make it easy to share your memories.

Send flowers to the Pritchard family.